Here's a map of the Iowa GOP caucus results (counties won by Huckabee in blue, Romney in red): 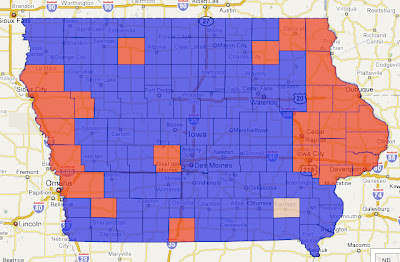 Now here's a map of the distribution of Catholics in Iowa (red equals the most Catholics): 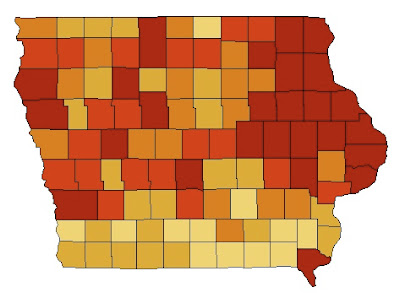 This suggests that Huckabee did very poorly among Catholics. Unfortunately, the entrance poll of caucus-goers only asked about born-again or evangelical status, not denomination. A quick regression of the county-level data backs up what the maps suggest; Huckabee did best among evangelicals in rural areas with lots of religious adherents. On the other hand, he did poorly among Catholics. This indicates that he will have an increasingly tough time in states without a large evangelical population and particularly in states with large Catholic populations.

Um, but you're treating every county as an independent observation when a glance at the map makes it clear we really just have a couple big regions. Since not only every demographic variable but some idiosyncratic Iowa-specific stuff is going to vary on those same regional axes, how seriously can you take this regression?

open snark
Well Every Evangelical Knows that the Catholics are a cult like the Mormons.
close snark

How seriously can you take that regression? An R2 of .46 accounts for a lot of variance, meaning that it's a powerful predictor of Republican causus voting in Iowa.