What is John McWhorter Talking About?

John McWhorter argues in the London Times that white liberals in the 1960s are to blame for the tragedy of Hurrican Katrina:

In 1966, however, a group of white academics in New York developed a plan to bring as many people onto the welfare rolls as possible. Across the country, poor blacks especially were taught to apply for living on the dole even when they had been working for a living, and by 1970 there were 169% more people on welfare nationwide than in 1960.

This was the first time that whites or blacks had taught black people not to work as a form of civil rights. Politicians and bureaucrats jumped on the new opportunity for political patronage and votes, and welfare quickly became a programme that essentially paid young women to have children.

Only in 1996 was welfare limited to five years and focused on training for work. But by then generations of poor blacks had grown up in neighbourhoods where there was no requirement that fathers support their children. Few grew up watching their primary parent work for a living. Most people paid nominal subsidies as rent and were thus less inclined to treat their living spaces well.

The multigenerational welfare family with grandmothers in their forties became typical: young women had babies in their teens because there was no reason not to with welfare waiting to pick up the tab.

This is the hell that most of the people in the Superdome either lived in or knew at close hand, and none of them could help being stamped by it.

McWhorter, of course, has no evidence for this. In fact, the evidence runs the other way. Take a look at the chart below:

Labor force participation rates of persons aged 25 to 54. Prior to 1972, data for Blacks include all non-Whites. SOURCE: Council of Economic Advisers (1998). 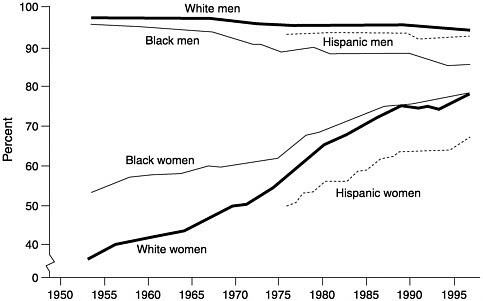 There has been a slight decline in labor force participation for black men since the 1950s, but this tracks along with a similar decline for white men. Furthermore, there is no significant change in this trend after 1966. For black women, those most likely to respond to McWhorter's purported cause and effect, labor force participation has increased, not decreased, since the 1950s.
Posted by Philip Klinkner at 3:12 PM

Phil, I don't buy your interpretation of the graph you present. Your graph does not show a "slight decline" in black male labor force participation. It shows a threefold increase in black males not in the labor force - 5% in the 1950s to 15% in 1995. What would be the state of the economy if the measured unemployment rate was 15%?

Phil,
The curve showing labor force participation among black females is actually another issue I have to take with your graph. Depicting black and white labor force participation isn't showing an apples-to-apples comparison. You have to normalize this data by taking into account percentages of black female heads of household vs. white female heads of household. A female whose choice to enter or not enter the labor force to supplement her family's income is different than one forced to choose whether or not her family has any income at all. I don't know for sure (because I are a engineer, not a political scientist), but I think this accounting for family makeup is going to present a very different looking graph.

just checked your blog. I invite you to visit my site too.