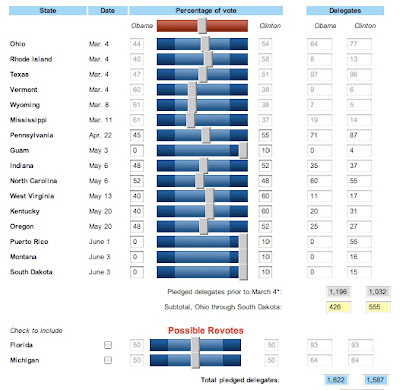 As you can see, this estimate includes some pretty big wins for Clinton in PA, WV, and KY, and some pretty narrow wins for Obama in OR and NC. In all likelihood, she'll probably do worse than this and he'll do better. Even so, it looks like May 20th will be the day that Obama gains a majority of the elected delegates. At that point, he can say that he's the presumptive nominee, unless the party wants to overturn that result with unelected superdelegates or redos in Florida and Michigan. I think that's unlikely for lots of reasons.
Posted by Philip Klinkner at 10:00 AM